As the forces of globalisation and disruption threaten to cause upheaval in many communities around the world, it is often governments and volunteer organisations that have stepped up to assist those displaced by the rapid change.

Thus, it is remarkable that businesses in Singapore have come together to create sustainable employment as the world heads towards an uncertain future, said President Halimah Yacob, as she launched the Sustainable Employment Pledge on Nov 22.

It is “wonderful” that businesses here believe in a collective effort to tackle issues brought about by changes in the global economy, she said at the Singapore Business Federation (SBF) Sustainable Employment Conference, which was attended by more than 200 business leaders and industry stakeholders.

She noted that many businesses do not like to talk about inequality, because the finger is often pointed back at them as a cause of the problem. As such, it was commendable that SBF and the business community are doing their part to enable sustainable employment.

A commitment to take action

At the event, the SBF called on the business community to take purposeful action on sustainable employment, as the country faces an ageing population and other challenges.

To this end, it released a report titled “Sustainable Employment – Achieving Purposeful Business Success Together”, which highlights key recommendations and potential opportunities to foster a vibrant economy and inclusive society.

Speaking at the conference, Minister for Manpower Josephine Teo said it was important that the industry demonstrated its commitment to sustainable employment. While the government often has a vision for the country, it still requires the business community to make it a reality, she pointed out.

“SBF, with this report, demonstrates the commitment on the part of businesses… to be part of the solution,” said Ms Teo.

Briefly, the recommendations are:

The sustainable employment initiative is a business-led effort driven by SBF in consultation with over 300 business leaders, trade associations and chambers (TACs), community organisations, academia and other stakeholders, including a 19-strong core committee chaired by president of the Global Compact Network Singapore (GCNS) and former chair of Shell Companies in Singapore, Ms Goh Swee Chen.

To date, 20 TACs have come forward to support the recommendations, including the Association of Small and Medium Enterprises, the Singapore Retailers Association, the Landscape Industry Association of Singapore as well as the ethnic, industry and foreign chambers of commerce. 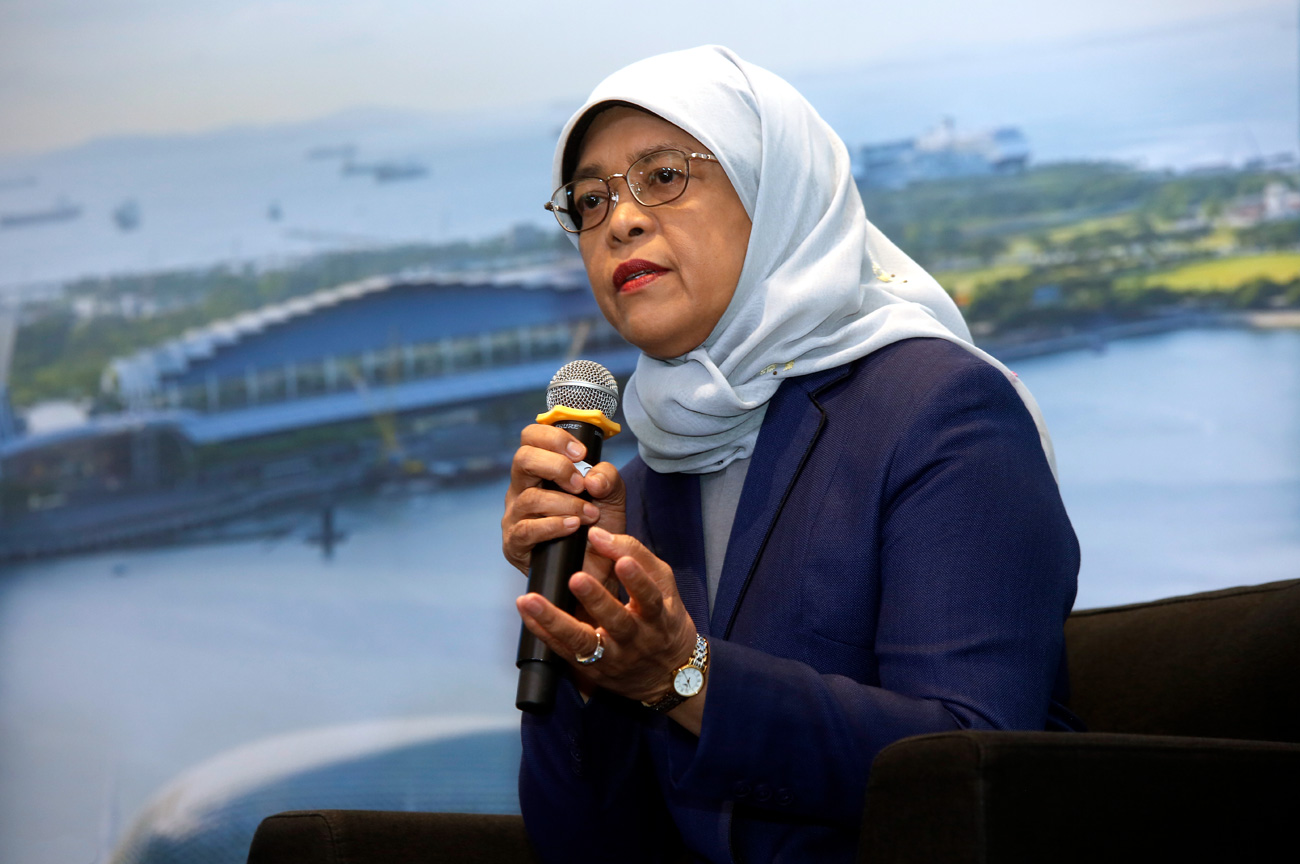 President Halimah said the SBF report was a good start to get people to get enthused and buy in. “You need to get them to be thinking and talking about it.”

She added that it was important to have a shared vision, at a time when protectionist tendencies have been fuelled by those who feel disenfranchised by globalisation.

Minister for Social and Family Development Desmond Lee agreed, noting that it was important that a common solution be found to face the challenges that disruption brings to the lives of workers everywhere. “We don’t want parallel universes in our cityscape — one where people are successful, and one where people feel disenfranchised.”

Those sentiments were shared by the SBF team that had worked on the report since February last year. Chief among their concerns were technological disruption and an ageing workforce.

If not addressed, these issues are going to drive a wedge in society, said Ms Goh in a panel discussion at the conference. There will be a growing gulf between the haves and have-nots, those with knowledge and those without, she added.

She also stressed that the SBF effort is a long-term one aimed at tackling an enduring issue. A programme office is in the works to monitor the progress of companies seeking sustainable employment, she noted.

Three groups of vulnerable workers are key to the effort for now: PMETs, mature workers and low-income workers.

Another panellist, Mr Jason Ho, who co-chairs the subcommittee on PMETs, urged businesses to see training as an important effort for their long-term business needs.

He cited his mother as an example of lifelong learning. She learnt a new skill — acting — at 70 after taking a course. Afterwards, she appeared in advertisements for companies such as Samsung.

Indeed, ageism is an issue that the SBF aims to tackle, as Singapore’s population greys.

Ms Melissa Kwee, who co-chairs the subcommittee on mature workers, said it was time that companies saw mature workers as a plus for their business.

“Discrimination is a massive dampener on productivity,” she added.

On the low-income subcommittee, Mr Veera Sekaran, its co-chair, said that there is an opportunity to multi-skill workers in the essential services, such as cleaning, security and landscaping, as a means to provide better career progression and raise wages.

Several companies such as Far East Organization, CapitaLand, Certis Group, CBM, Greenology, ISS Facility Services and Pontiac Land have come on board as pioneer companies to explore clustering suitable jobs in the Estate/Facilities Management sector to boost workers’ value, productivity and wages. Pilot trials with smaller groups of workers will be conducted as a lead-up to the formation of an Estate Management Centre.

By enlarging their job scopes, they can be rewarded for delivering higher performance, said Mr Sekaran.

Make the pledge for Sustainable Employment today. For more information, visit our site. Share your company’s journey to adopting sustainable employment practices with us by emailing sustainable.employment@sbf.org.sg