Cambodia’s economic transformation in recent years has drawn the attention of international investors and businesses, including those from Singapore. According to this year’s SBF National Business Survey, Cambodia ranked 7th in a list of countries that local businesses are keen to expand to.

Cambodia is one of the world’s fastest growing economies, expanding at an average rate of over 7% in the last decade, according to data from the World Bank. This rapid expansion has been fuelled largely by the garment manufacturing, real estate, construction, agriculture, and tourism sectors.

The country’s rapid growth is expected to continue in the foreseeable future. In its Regional and Economic Outlook in October 2019, the IMF projected Cambodia’s economic growth to be the highest in ASEAN this year. 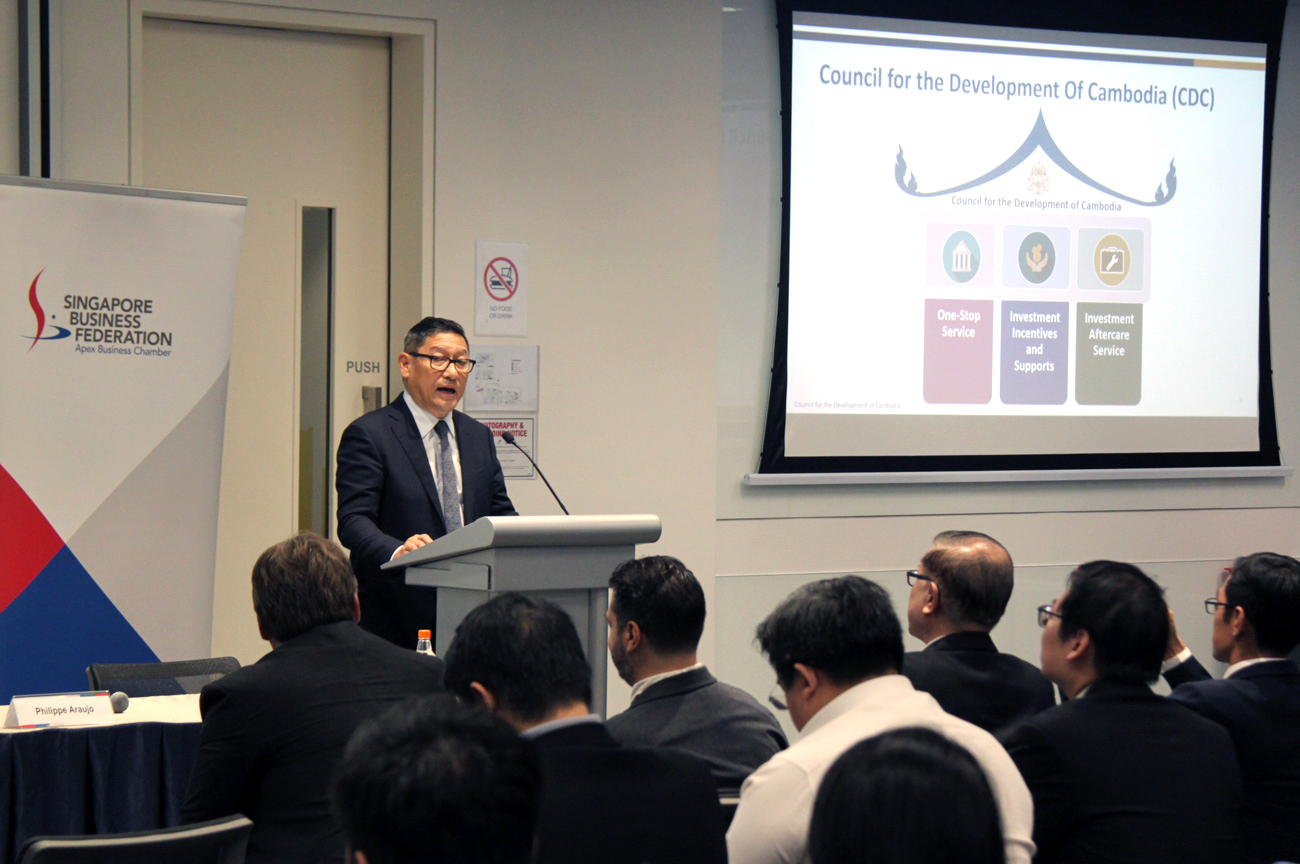 Mr Sok Chenda Sophea, Secretary General of Council for the Development of Cambodia addressing the audience

At the Cambodia-Singapore Business Dialogue organised by SBF on January 15, participants were given an overview of the business opportunities in the emerging market. “Countries in the Mekong are all in need of infrastructure; it is definitely a sector you have to look at,” said Mr Sok Chenda Sophea, Secretary General of Council for the Development of Cambodia, who was the event’s guest-of-honour.

There has been much investment in Cambodia’s infrastructure in recent years. According to the Ministry of Planning’s National Strategic Development Plan, the government planned to upgrade and repair 5,150 km of rural roads by 2018.

The government has also announced its plan to build new rail networks, with Thailand, Japan and China all expressing interest in working on projects to expand rail services throughout Cambodia.

Tourism is another important sector with huge potential due to the country’s famous temples, such as Angkor Wat. Another speaker at the dialogue, Michel Cassagnes, Managing Director of architectural firm Archetype Cambodia & Laos, said that there was a need for more mid-sized hotels to be built in Phnom Penh, the Cambodian capital.

There were around 450,000 tourist arrivals in Cambodia in June 2019, and this number is projected to trend around 750,000 in the long-term, according to data from forecasting firm Trading Economics.

Meanwhile, Singapore manufacturers can take advantage of the country’s youthful and low-cost labour force. Cambodia has one of the youngest populations in Southeast Asia, with around two-thirds of its 16 million people below the age of 30 years. 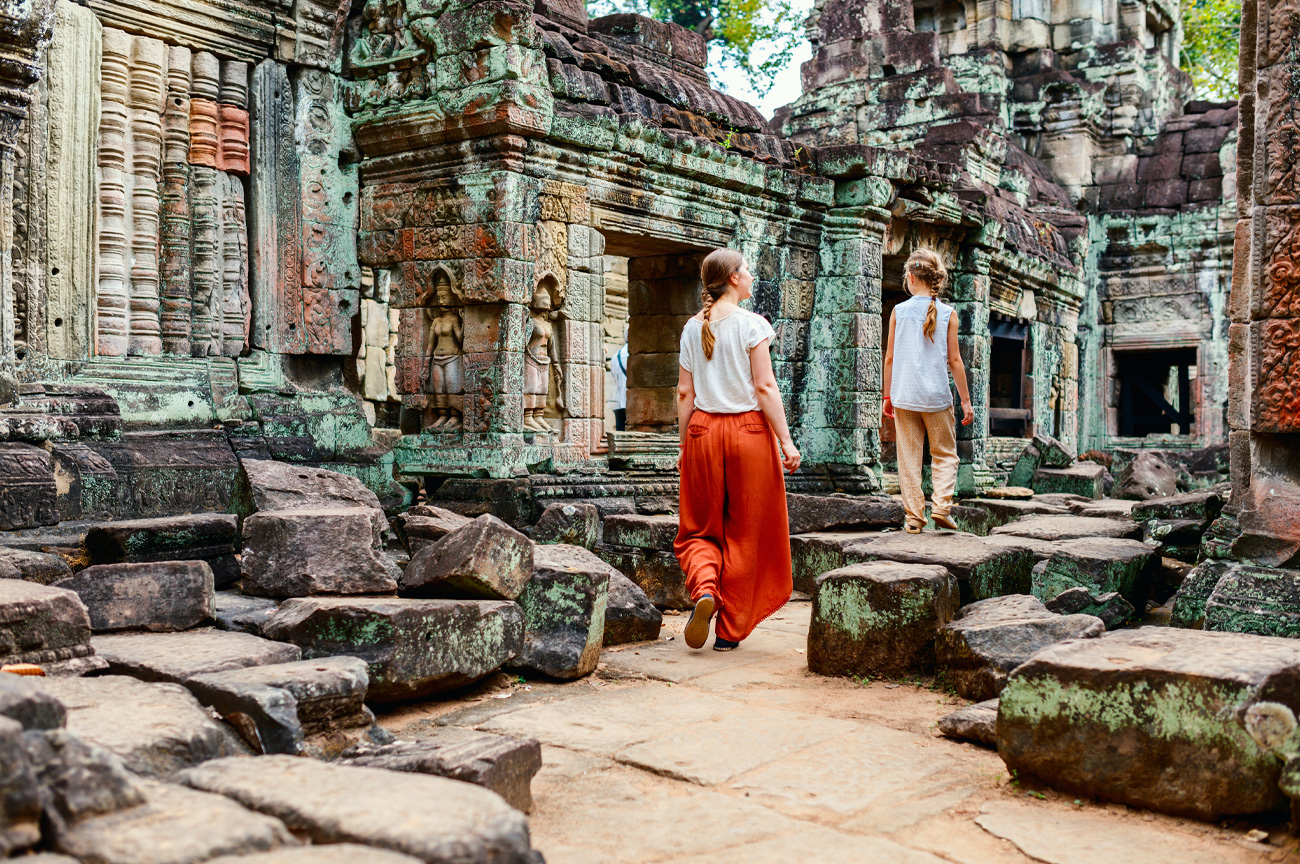 Some of the pro-business incentives foreign businesses can enjoy include 100% foreign ownership of companies, profit tax exemptions of up to six years, duty-free import of capital goods, and no restrictions on capital repatriation.

Cambodia is also ranked 20th in the world for ease of getting credit. The entire process of starting a business in the country – from company registration to getting approval to hire locals – takes approximately four months, according to the Ease of Doing Business Ranking 2018.

SBF has been doing its part to raise awareness of Cambodia among the local businesses, having led two study trips to the country in 2019 to explore opportunities in the infrastructure sector.

Singapore companies have so far set up businesses in Cambodia in the real estate, finance, energy and logistics sectors. For instance, agriculture and property company HLH Group is developing a mixed-use development in Sihanoukville, and solar company Sunseap Group will launch a large-scale solar farm project in Svay Rieng province.

“Moving forward, SBF will work to establish more platforms for our businesses to internationalise, particularly in ASEAN which remains a key region of interest due its relatively high growth rate. It is, in fact, an opportune time for companies to venture into ASEAN as there has been a recent shift in supply chains to the region. Therefore, we urge companies to seize this development to their advantage,” said SBF CEO Mr Ho Meng Kit.

Singapore companies keen on finding out more about Cambodia and other overseas markets can tap on the GlobalConnect@SBF programme, which provides market information, advisory services and business matching platforms for businesses looking to internationalise.

Looking beyond the usual pool of talent