Five Trends Every Business Investing in Africa Needs to Know

With 40 African countries implementing a total of 107 reforms in 2018, up 24 from the previous year, the drive to strengthen governance, fight corruption and address challenges such as inadequate electricity and financial services bodes well for business growth.

Home to five of 2018’s top 10 improvers – Côte d’Ivoire, Djibouti, Kenya, Rwanda and Togo – Sub-Saharan Africa (SSA), boasts favourable growth prospects although greater economic diversification would strengthen resilience to commodity price shocks. The IMF predicts that in 2019, 18 out of 45 SSA countries will grow at least 6% compared to 10 in 2016 – well above the global trend.

East African countries, led by Ethiopia, Kenya, Tanzania and Rwanda, have been enjoying growth rates of more than 5%, thanks to the region’s positive economic growth, low labour costs, political stability, an improved regulatory environment and a sizeable market of over 200 million people. Growth is expected to reach 5.9% in 2018 and 6.1% in 2019.

Target industries include agriculture, manufacturing and tourism, as well as mining and electricity generation.

Ghana, amongst others, has started to add value to its raw materials, thereby stimulating its manufacturing base. It is now part of a growing group of countries that have legislated the beneficiation of raw materials before exports. Countries such as Nigeria are targeting the ‘blue ocean economy.’ In Nigeria, indigenous ship owners can now acquire new ships for local use and gradually build up their fleet at low cost.

Various countries, including Angola, Ethiopia and Zimbabwe, have announced plans to privatise state-owned companies. This offers significant investment opportunities. Ethiopia, in particular, has become the fairy tale of 2018 with Dr. Abiy Ahmed’s appointment as prime minister.

In exchange for shares in state-owned Ethiopian firms, including the profitable Ethiopian Airlines. Ethiopia is taking a stake in the Port of Djibouti. Various agreements were inked with governments in the region to give landlocked Ethiopia access to the sea, thereby reducing its dependence on Djibouti. Dr. Ahmed’s government also decided that private investors could buy complete or partial shares of public enterprises aimed at promoting efficiency and productivity, enhancing sustained growth and ensuring management accountability.

In addition to the likes of the USA, the EU, China, Japan, India, etc., new entrants are targeting Africa. While China is still Africa’s largest trade partner, Russia is joining the competition for influence and trade in Africa. It is now involved in various countries throughout Africa, including Egypt, South Africa, the CAR, Nigeria and Ethiopia. Turkey and some GCC states have also been continuing the expansion of their footprint in Africa. 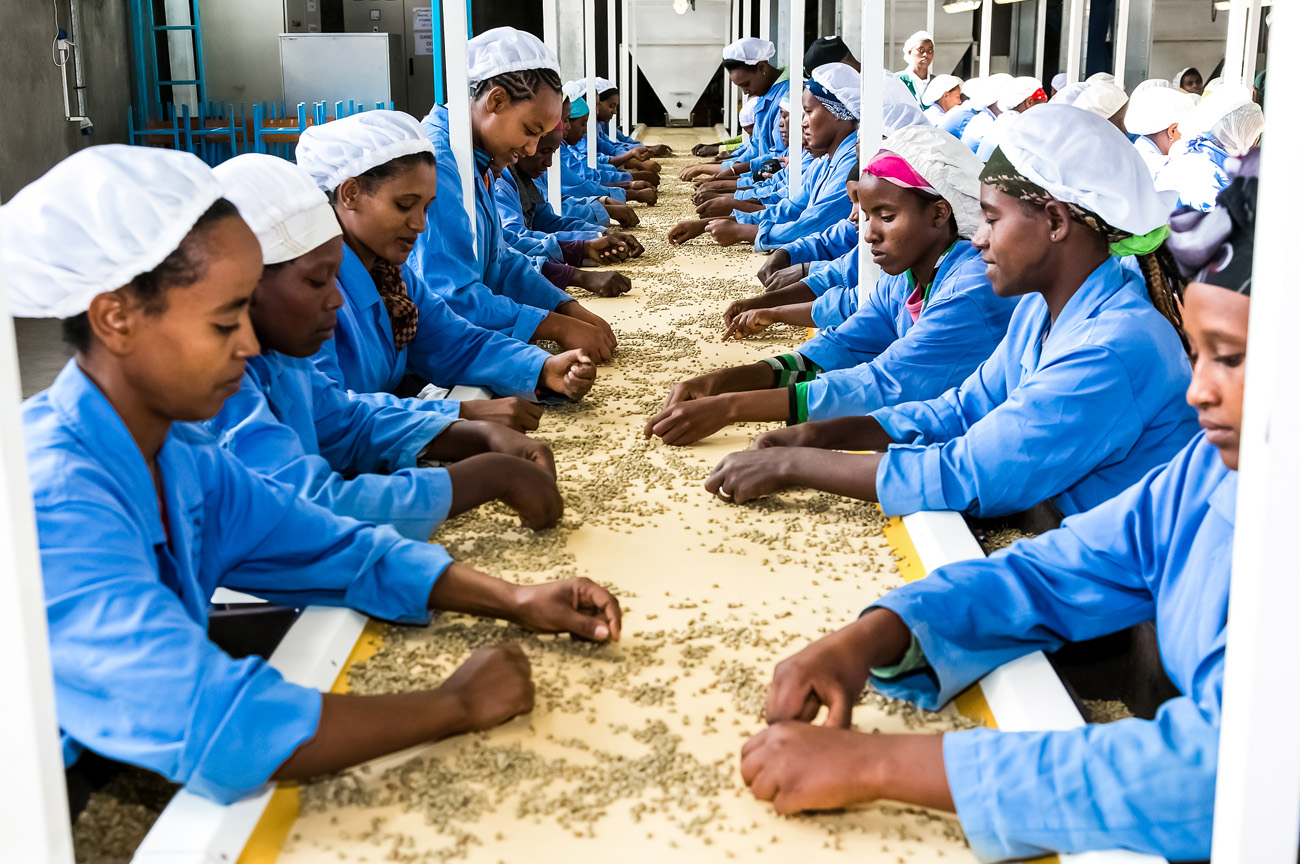 Raw coffee bean sorting and processing in a factory in Addis Ababa, Ethiopia

Manufacturing and industrialisation are transforming Africa’s economies through diversification.

B2B spending in manufacturing is projected to reach US$666.3 billion by 2030, up US$201.28 billion from 2015. Africa is seen as the world’s next great manufacturing centre, potentially capturing part of the 100 million labour-intensive manufacturing jobs that will leave China by 2030. This trend creates a huge opportunity for African countries, like Ethiopia, that have recently adopted policies enabling manufacturing and industrial development.

West Africa has also started to prioritise the manufacturing sector as a development zone. In Ghana, the pharmaceuticals industry is expected to reach US$1 billion in value by 2018. Nigeria is also looking at significant growth in the pharma sector.

Africa’s infrastructure requirements are estimated to be between US$130 billion and US$170 billion, with a financing gap of US$108 billion. Given this, Africa must attract private capital to accelerate the building of critical infrastructure needed to unleash its potential.

To this end, the AfDB is working with global development finance institutions to develop a mutualized co-guarantee platform to de-risk investments and facilitate projects that have the capacity of transforming Africa.

In many African countries, housing is an urgent need, likewise energy infrastructure. Hotels are being built in East Africa to meet the demands of the hospitality sector in Kenya, Ethiopia, Tanzania, Uganda and Rwanda.

Renewable energy is becoming increasingly important. Various countries have embraced solar energy. Ghana wants to accelerate the development of mini-grid solutions in off-grid and island communities for lighting, irrigation and other economic activities. The development potential of Nigerian mini-grids is valued at US$20 billion. The development of off-grid systems could save individuals and businesses US$6 billion per year. By scaling up the mini-grid market to 10,000 sites, the sector can electrify an estimated 14% of the population and generate annual returns of US$3 billion by 2023.

The focus on renewable energy bodes well for the development of industry in these countries, especially in the manufacturing sector. 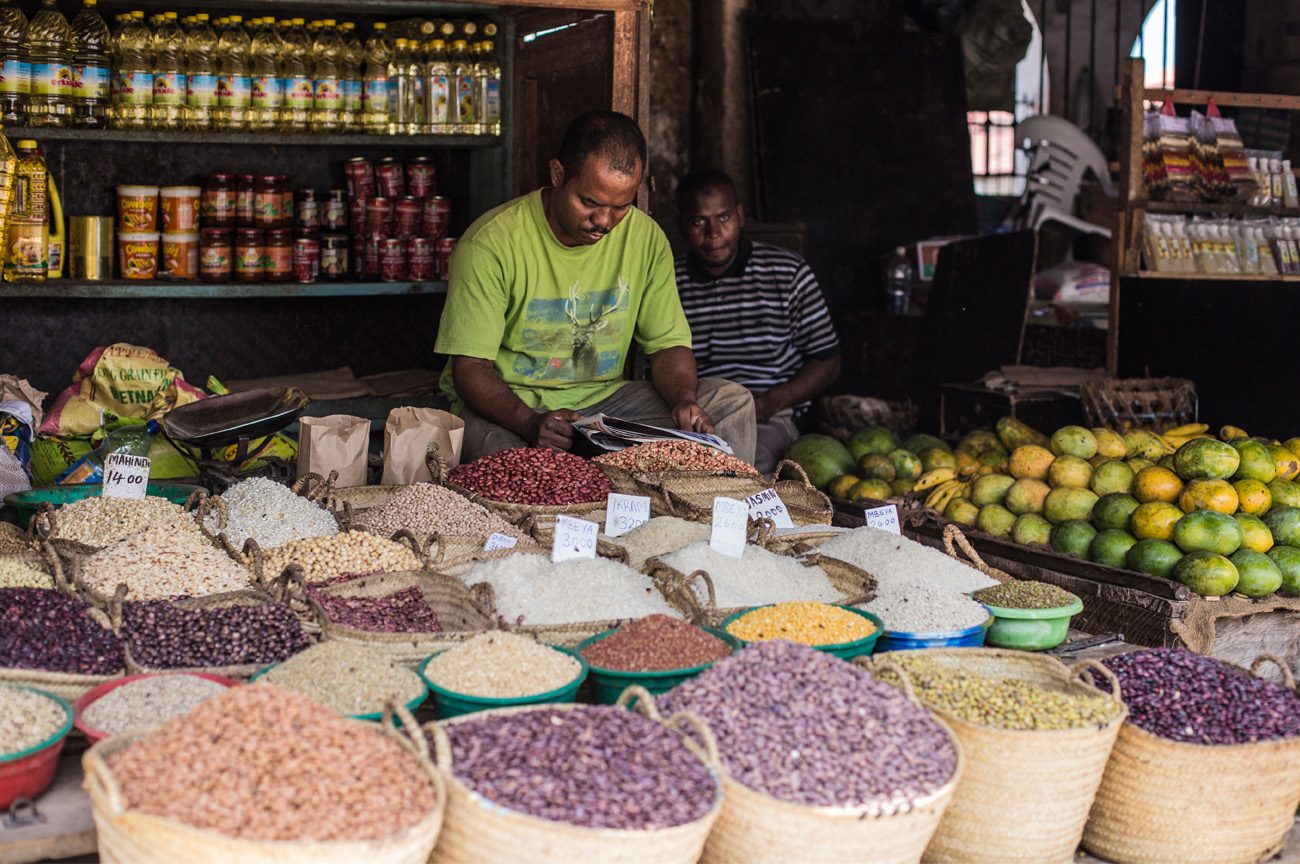 Variety of rice and beans on the market in Stone Town, Zanzibar

Africa is a net importer of US$41 billion of food annually and the figure is set to grow to US$110 billion by 2025, if nothing changes. CEOs in the agriculture sector are looking for diversification within their current commodity value chains before moving into new commodities. Angola, Botswana, Ethiopia, Malawi and Namibia are seen as the top five destinations for expansion.

To reduce pressure on their economies, governments are encouraging businesses to stop importing goods and to invest in agricultural production for local consumption and exports. Companies, like FarmCrowdy in Nigeria, are tapping into crowdsourcing and social media to link up investors, farmers and the markets.

Ethiopia, Ghana, Kenya, Nigeria, Rwanda and Tanzania all present investment opportunities in the growth and value-addition of agricultural products. Coffee, maize, sugarcane and rice farming will be highly lucrative in the next few years. Reports state that the future demand for the four crops will be relatively high in both the domestic and export markets.

In Africa, the mobile phone as a platform business model is gaining traction on an unprecedented scale. Financial inclusion in Sub-Saharan Africa has increased from 23% in 2011 to 43% in 2017.

Today, there are US$300 million worth of monthly transactions from 7.2 million people using digital financial services (up 250% from 2012) and 45,000 new banking agents. Mobile money solutions now offer many traditional banking products. Banks should be concerned as they run the danger of being disintermediated.

Countries where fintech is growing include the DRC, Nigeria, Rwanda, Somalia, Tanzania, Uganda, Tanzania and Zimbabwe.

2018 saw the explosive growth of e-commerce with increased usage and trust in the technology. While Jumia is the largest e-commerce platform in Africa, Kenya’s Kilimall has been growing as well., with more players expected to join the market.

Johan Burger, Director of the NTU-SBF Centre for African Studies

The author, Johan Burger, is the director of the NTU-SBF Centre for African Studies, a trilateral platform for government, business and academia to promote knowledge and expertise on Africa, established by Nanyang Technological University and the Singapore Business Federation. Johan can be reached at johan.burger@ntu.edu.sg.

If you’d like to receive the latest updates on SBF activities related to Africa, please drop us a line at market.amea@sbf.org.sg