Gaining a foothold in South Korea

To boost trade and collaboration between businesses, the Singapore Business Federation (SBF) led a delegation of 26 representatives from 22 local companies to South Korea in October 2018, as part of its Overseas Market Workshop (OMW) initiative. An OMW is an in-country immersion programme that enables SBF members to get a first-hand view of an overseas market’s dynamics.

There are currently over 50 Singapore companies operating in South Korea or partnering Korean counterparts. There has been growing investment interest among Singapore companies in sectors such as real estate, manufacturing, electronics, and information and communications technology.

“SBF’s inaugural Overseas Market Workshop to Korea provides a valuable platform for our companies to gain insights into the latest technologies and innovations in Korea, which has ranked as the most innovative country worldwide for five consecutive years on the Bloomberg Innovation Index,” said Mr Cheong.  “The learning, as well as closer networking forged during the programme, will enable our firms to transform their business models, and eventually lead to more business collaborations between Singapore and Korean companies.”

Mr Anthony Ong, an OMW delegate and Group CEO of Jing King Tech, said: “South Korea has a strong vision in enabling liveable smart cities and has notably made significant advancements in its smart city transformation in the last decade.” 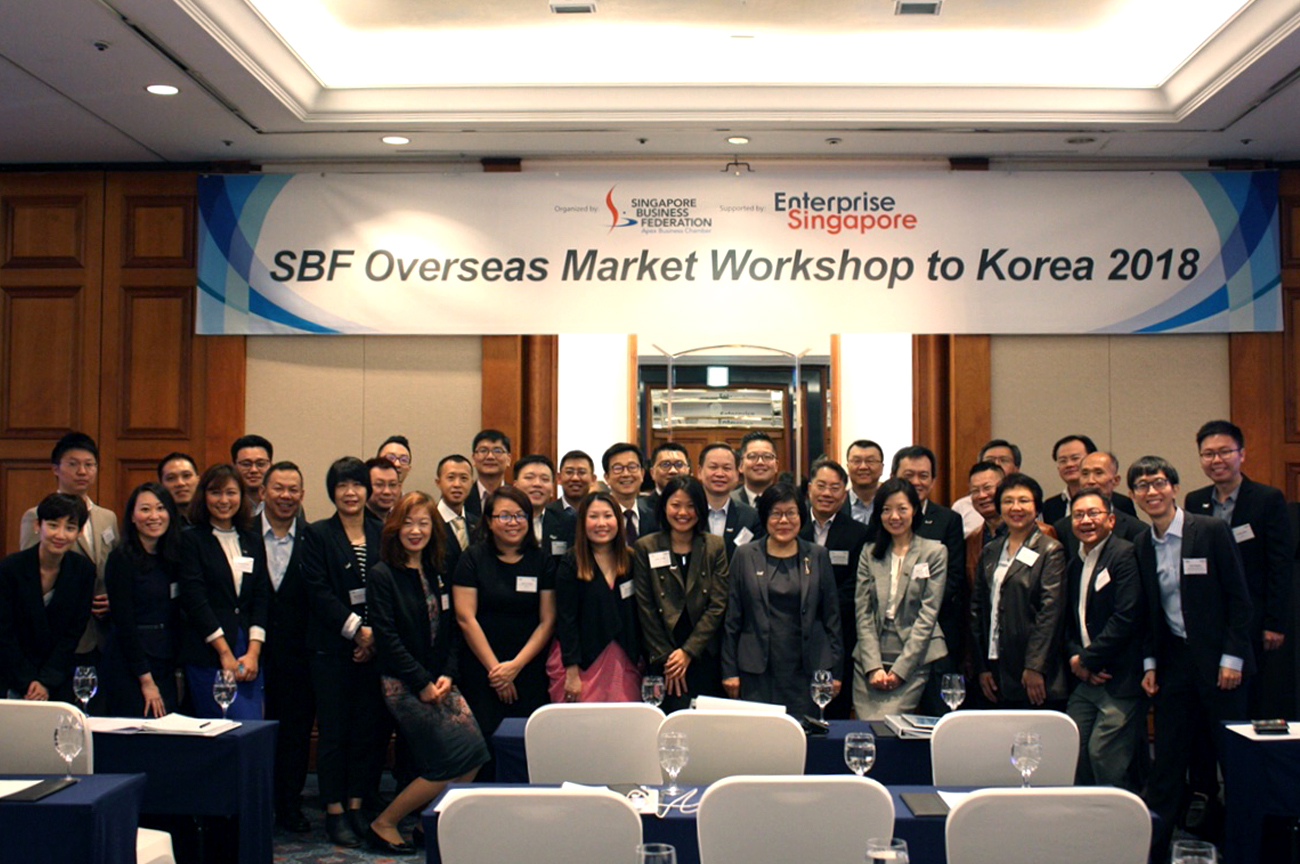 The SBF’s delegation to South Korea is a follow-up to the state visit by South Korean President Moon Jae-in to Singapore in July 2018, during which two partnerships aimed at strengthening bilateral trade and investment were signed.

Market access
The second agreement, between Enterprise Singapore and Korea Trade-Investment Promotion Agency (KOTRA), aims to boost market access and investment opportunities for companies in the two countries, with a focus on smart city, infrastructure development, lifestyle and consumer, e-commerce and liquefied natural gas sectors. KOTRA will serve as a one-stop agency to promote Singapore companies’ investments and expansion of operations into South Korea.

Opportunities for Singapore companies in Korea

Renewable Energy
In 2017, the Korean government announced its aim of having renewable energy account for 20% of the country’s needs by 2030, up from the current 5%. This planned growth spells opportunities for Singapore firms with the relevant expertise.

Water
In 2016, the Korean government also announced plans to invest ₩8.7 trillion (S$10.8 billion) from now till 2030 in technology-based smart water supply and sewage systems. As Korean companies enter the sector, they will be on the lookout for partnerships with Singapore players that have strong industry know-how and technological expertise.

Food Services
There is a strong demand among Korean consumers for unique food concepts and experiences. As a country that imports about 70% of its food and agriculture needs, South Korea is a natural market for Singapore F&B brands keen to expand their global footprint.

Logistics
Strategically located between China and Japan, South Korea serves as a natural logistics centre in northeast Asia and is home to the world’s sixth busiest port in Busan. Singapore players can enter the market and be part of the country’s extensive network of distribution nodes and links.